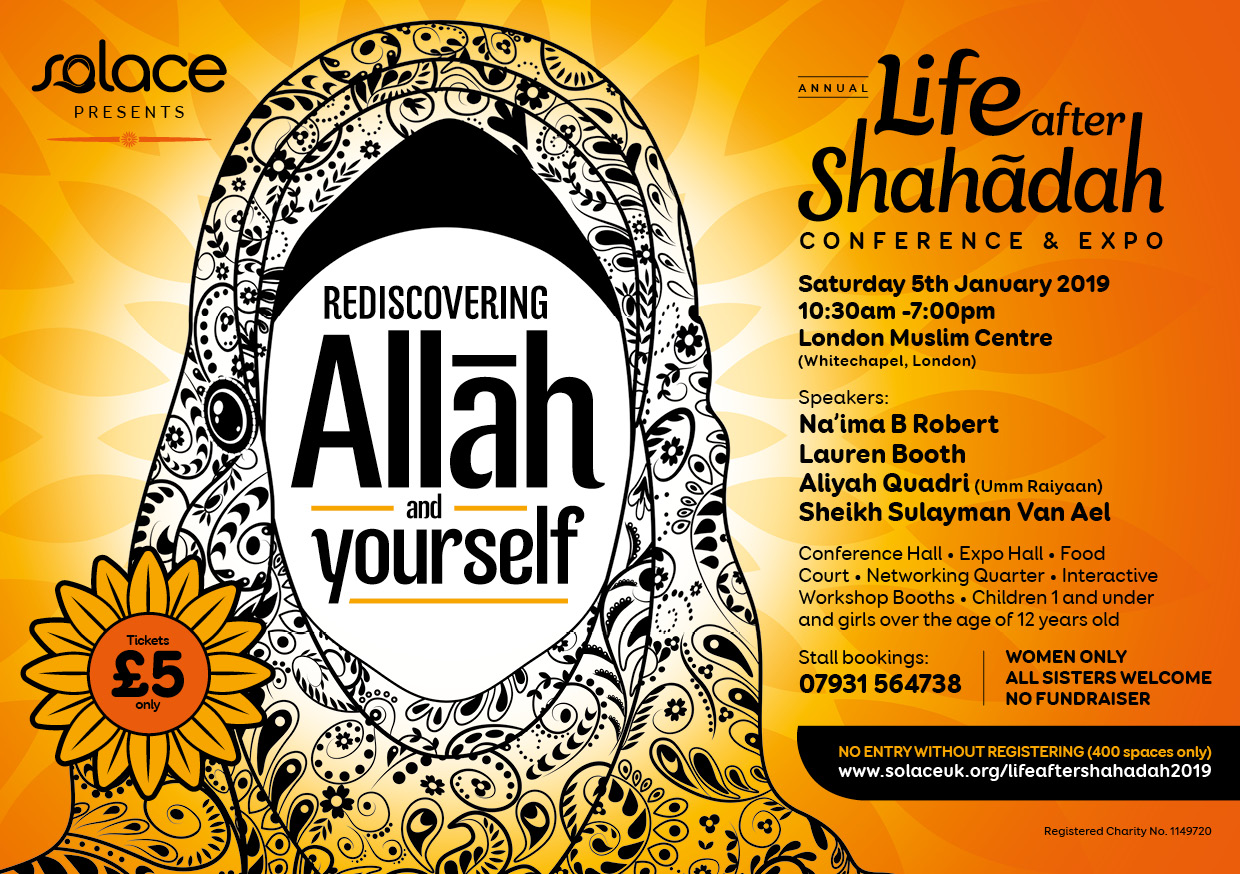 Do you feel that you're struggling to hold onto your emaan? Do you feel you have lost yourself in the midst of trying to be a practising Muslimah? Do you want to rediscover your Lord and create a meaningful relationship with Him? Do you feel like you want to restart your journey as a believer?

Do you want to learn how to cope with life's struggles whilst maintaining who you are and realising Who and What your Lord can do for you?

As our first Life after Shahadah conference, we will take you on a journey where you will rediscover Allah and yourself inshaAllah!

What to expect on the day:

Conference Hall
* 4 deeply inspiring lectures
* A 'Rediscover Allah and yourself' self development workbook
* 4 interactive live exercises to kickstart your journey of rediscovery
* Two interactive workshop booths - 50 spaces only for each workshop:
14:45pm - 'The Orange Cushion' - Where women will grow and glow(!) around an orange cushion!
16.30pm - 'Speed Discovery' - It's the art of rediscovering against the buzzer!

Speakers and their lectures:
11:30am - Aliyah Quadri (Umm Raiyaan) - 'A Lesson in Loss'

Aliyah Quadri (Umm Raiyaan) reverted to Islam 19 years ago and has been involved in UK dawah for over 15 years. In 2010, she founded Solace UK, a registered charity that helps revert sisters who are in difficulty. In 2014 she launched the ‘Achieve Your Dunya and Akhirah Dreams’ course as part of her initiative, Sisters Achieve. Alhamdulillah, the course has been well received with over 400 sisters worldwide completing the program. She is a Trainer and Practitioner of NLP and holds a BA (Hons) in English Language and Literature. She passionately believes that every Muslim woman can tap into their full potential to break through their mental barriers and become better versions of themselves. Aliyah is devoted to helping sisters to achieve their full potential whilst emphasising the importance of developing a personal and close relationship with Allah. She lives with her husband and four home-schooled children.

Lauren Booth is a journalist, broadcaster and author who lectures and presents workshops internationally.
Since accepting Islam she has focused her skills on creating both spiritually enlightening and politically challenging content available across a wide variety of platforms.
She is a sought after public speaker, offering accredited media training to Muslim organisations. She is invited onto mainstream TV and radio stations where she challenges the rising anti-Muslim rhetoric of right wing movements and politicians.
Her popular podcast series ‘Heart and Soul’ is now featured on Muslim Central.
‘Finding Peace in the Holy Land’ Lauren’s memoir, tracks the challenges and joys she has encountered before and since accepting Islam.
It is available on amazon.co.uk from September 2018.

Na’ima B. Robert is the award-winning author of From My Sisters’ Lips, Boy vs. Girl and She Wore Red Trainers. She is the founding editor of SISTERS, the magazine for fabulous Muslim women and Trainer-in-Chief at Muslimah Writers, a project dedicated to helping train and develop the next generation of Muslim women writers.

Shakyh Sulayman Van Ael converted to Islam at the age of 18. He then memorized the Qur'an in the desert of Sudan. He continued his studies of the Arabic language, Usul al fiqh, Mustalah hadeeth, with more than 50 different mashayikh in Jordan, Saudi Arabia, Emirates, Morocco, Belgium and Holland.

He then attended an intensive in Riyadh, where he received shahadat in Arabic, Usul Fiqh, Hanbali fiqh and Mustalah hadeeth.

From 2002 to 2009 Shaykh Sulayman studied in Jordan. He was appointed as a khadim in the Gufran mosque with the responsibility of delivering the jumuah khutbah, leading prayers and Taraweeh prayers. He completed his 14 qira'at (recitation styles of the Qur'an) and received permission to pass on the 14 qira'at, teach Arabic and pass on hadeeth and fiqh from several scholars.

He was a lecturer at Erasmus High School, and is currently the Muslim Chaplain at LSE and Imperial College and a lecturer at the accredited Rotterdam Islamic University, where he teaches comparative studies of religion and Usul al fiqh.

He has his bachelor in Theology and his Masters (theory) in Mental Health. Shaykh Sulayman is fluent in Arabic, English, French and Dutch.

What to expect post-conference:

* A post-conference 4 week program only for attendees
* A post-4 week-program online video finale!

We look forward to spending a day AND THEN 4 weeks of rediscovery with you inshaAllah.