When I first embraced Islam, the idea of dhikr wasn’t really clear to me. Remembering Allah – ok. Having a list of words, a certain amount, that should ideally be said daily, like a tick-off list, I thought, because it’s a sunnah and it’s an act of worship.

A few years went by and I  learnt the meaning of some of the basic dhikr, trying to make it a habit, to feel like I’ll have some worship to show on the Day of Judgement, more than anything; to feel like I haven’t wasted all my time everyday and that I have moistened my tongue with Allah’s name daily, even if a little. I suppose it wasn’t bad… Looking back now I think it was a good beginning. Yes, beginning, because there is so much depth to dhikr, as I was about to find out soon.

It was only a few months back when I came across dhikr as something different at a local masjid. I could hear them on the receiver sometimes when my husband started attending lessons, and I began to pay more attention to Dhikr then too. You know, this “I don’t want to be worse off deenwise” kind of motivation. And as I learnt more, I discovered many phrases I’ve never come across before. Many of them were duaas of the prophets quoted in the Qur’an. It gave another meaning to dhikr for me – now it felt like a four-in- one deal for the Aakhirah: a sunnah, an act of worship, actual words of the prophets using the prayers that we know Allah has answered, as well as knowing and reciting verses of the Qur’an!

I memorised more of  them and their meanings and as we began to do it regularly as a family, slowly things began to change. I could see an increase and more stability in my imaan ( faith ). We began to change for a little better in our worship; began to pray Tahajjud routinely with ease, all of a sudden after all the struggle and “one day in the long future I will” attitude, soon after the days where I couldn’t even wake up for Fajr. This routine of sitting down and switching off from the world to do some serious dhikr for about half an hour gave my soul a joy, and my mind a peace I have never experienced before. All the stress of the day would perish, I felt calm, relaxed and really fresh in my mind. I switched completely off, no back-of-mind distracting thoughts. It felt like meditation. I think, as I’ve never tried it. Now dhikr became my charger. I can not describe the feeling of joy when I’ve learnt to silence my mind and focus on Allah only. If you are an overthinker, you’ll know what I mean! Our minds can never get quiet. There is always some background noise of what-ifs and buts and mayebes.

Once I learnt the meaning of some of these phrases, my duaas became so much more interesting. Not that I think Allah is ever bored of us asking, not at all, yet there is a difference between “please Ya Allah help me with something” and all the phrases used by prophets.

“La ilaha illa anta subhanaka inni kuntu minaz zalimin” – cried Yunus, alayhis salaam, inside the whale’s belly. A duaa recommended for situations when you feel there’s no way out, for depression. What an amazing lesson of humility; what an eloquent sentence praising Allah in many ways! There is no god but You, You are far exalted and above all weaknesses, and I was indeed the wrongdoer. In one simple duaa you acknowledge Allah’s Oneness, Power and Mercy as well as your own sinning nature for which you apologize. A prophet, a person many times better than any of us, could admit his own wrong doing, his imperfection – he taught us the beautiful lesson of being humble in front of our Creator and begging for forgiveness. This is a duaa our Prophet Muhammad (s) mentioned in hadeeth as one that is answered and removes any difficulties. 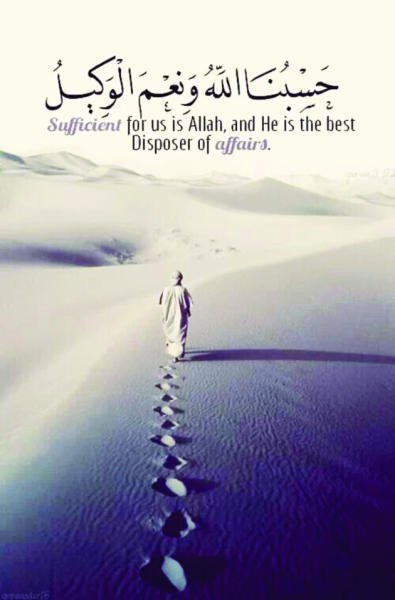 Another one to mention is “HasbunAllahu wa ni’mal wakeel”, one of my favourites recently, meaning “Allah is The Best in disposing of our affairs.” I remember this line every time I face some problems. I recite it before making duaa for resolving any trouble and my Allah, The Most Merciful, protects my weak and insecure nature with peace and the belief that He will take care of everything comforts my heart. I love the story of the sahaba using this dhikr. It was when people came to warn them of a huge army lead by Abu Sufyan coming to attack them. Those people hoped this story would scare the sahaba, as there was only 313 of them. Instead, this duaa is exactly what they said: “hasbunAllahu wa ni’mal wakeel,” and Allah loved their firm belief so much that He not only helped them to defeat the enemy whilst being outnumbered, but also revealed it to us as an ayah of the Qur’an, so that we all have the example of a beautiful connection with our Creator to aim for.

The third of my favourite dhikr phrases is “la hawla wa la quwwata illa billah.”  There is no might or power except by Allah’s will. A sentence from the treasures of Paradise (Bukhari). What a gift! The translation can’t do it much justice, it oversimplifies it. It is again, a statement of humility, admitting that everything happens only with Allah’s help. The strongest and most powerful people are powerless in front of Allah. Admitting so is another step to abandon the arrogance within, once and for good. We can never achieve anything if it wasn’t for Allah’s will and plan. All the strength, power and glory belongs to Allah only. And He gifts it to whom He wishes, and if He wishes, He takes it away in a same manner. It is never down to us.

These beautiful adhkaar (plural of dhikr) help me to keep a strong connection with Allah, and whenever I feel my imaan getting low, or suffering,  I always think of dhikr as the medicine for my soul. I could never recommend it enough and I really encourage those who haven’t, to establish a habit of regular dhikr. It is more precious than the whole world put together to feel close to our Creator, and dhikr is one of the best tools to achieve this prize.

Abu Darda reported: The Prophet, peace and blessings be upon him, said, “Shall I not tell you of the best of your deeds, which is the purest to your King, which raises you among your ranks, which is better for you than spending gold and money in charity, and which is better for you than meeting your enemy and striking the necks of each other?” They said, “Of course!” The Prophet said, “It is the remembrance of Allah Almighty.”

Sadeemka is Silesian, a language supporter, mother, revert, blogger. They call me a migrant but I disagree: I belong nowhere, interested in the never-ending journey.